Easy steps to geting killed by your switched-off appliances

My (Saike 852D+) soldering station was bought from a seller here in New Zealand, but it had obviously originated from China. It's a low-cost model that is marketed for SMD rework, comprising what measures to be a 750 W hot air rework gun, and a small soldering iron—costing only around NZD$200. For that I didn't expect total crap, but I didn't expect the greatest of quality.

I opened it up to check its electrical safety once it arrived and found that, contrary to my initial suspicion, the fuse wasn't on the neutral wire (unlike on the shiny brick power supply encountered in the past). It was instead, wired in the correct place; the phase. Instead, the main power switch on the back of the unit was wired onto the neutral. Dangerous and illegal.

I decided to use it without modification for the short warranty period provided locally, unplugging it instead of using the main power switch. After this period expired, I would carry out the simple fix to put the switch onto the live side.

Why is this so dangerous?

At first glance, the position of the switch, fuse, or any such break in an AC circuit doesn't appear to matter to most people, especially since AC is "constantly switching polarity all the time". Indeed, the configuration isn't problematic in an ideal world without fault conditions. However, imagine an appliance with the fuse on the neutral, and then imagine the phase somehow shorts to the earthed metal case. The fuse won't blow, because excessive current isn't flowing through the neutral and fuse. You would instead be placing your life in the hands of a RCD, or the circuit fuse, the latter of which is unlikely to blow in time to stop fibrillation. Touch the metal case of the device and you could be killed to death.

Similar things apply to the switch. In the case of my soldering station, it is the user's expectation that turning off the main switch on the device would de-energise all parts of it. What really happens is that mains voltage is still present as far as the 750 W heating element (and its return path). This means that electrocution and fire hazards are present even when the device has been powered off. Imagine if part of the element shorted to the earthed casing of the heater wand while the blower wasn't running, even while the device's power switch is off!

Instead, the live conductor should always be the one that is switched and fused. Even safer is to switch both the neutral and phase. Earth shall never be switched or fused, and at no point shall both live and neutral be fused, or else you may end up in the situation where the fuse on the neutral side blows, but not the live side, and you're back at square one!

After the warranty period expired, I cured my Saike 852D+ soldering station of the rampant disease known as Chinese Switched Neutral. As mentioned, I was lucky enough to have dodged the Chinese Fused Neutral which is just as dangerous. I have encountered the fused neutral on such devices as the shiny brick power supply we repaired.

In the photo below, the neutral from the main power cable (blue wire) is connected to one side of the switch (top device) while the phase (brown wire) comes into one side of the fuse (bottom device). The remaining connections on each then go off to the main board (red and black). Danger! Danger!

Please do note that the photo was taken after having removed black heatshrink that was rightfully covering these two bare connections.

This is how it should have been wired:

The only modification that was necessary was to remove the neutral wire from the switch, the black wire from the fuse, and to bridge them together, followed by putting a small loop from the fuse to the switch. This also had the effect of switching the roles of the red and black wires that lead to the main board. Black now carries neutral and red the phase. 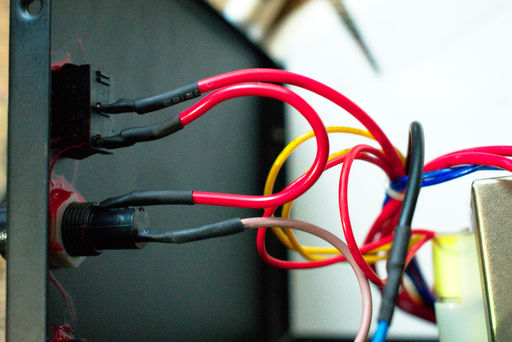 And for completion's sake, the neutral wire looking sharp, dressed, and ready for its hot date. 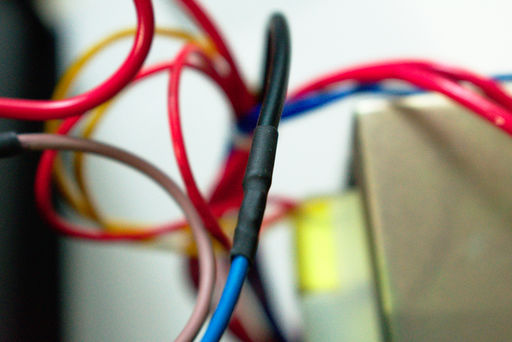